From NZ Hardware Journal in August 1996, we pick out some of the most interesting people. 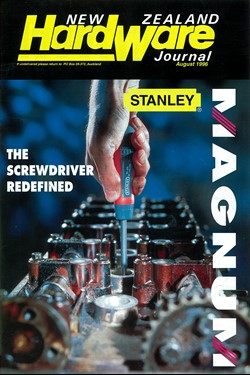 In August 1996, Mark Glidden was the new NZ Sales Manager at Arlec. He’d go onto be a mover & shaker at Timberlock and now Senco Brands.

And Ray Sadler was celebrating 18 years of Garrison Security, then with eight stores and even some staff embedded into PlaceMakers stores. Today Ray runs Garrison Alarms.

20 years back, John Seabright and Ashley Corbett (photo right) had just bought bathroom and hardware specialist Jaeco from the McIntyres. Jaeco is family owned and run to this day and in fact has just bought Drake & Wrigley.

Another family affair going strong back in 1996 was Matamata’s The Boltholder. Started in 1983 by the Thissen family, the firm had developed into a serious player in bolts, nuts and steel fasteners.

Peter Thissen still runs the business, which boasts 700 tonnes of product in its purpose-built warehouse, which is still in Matamata.

Another family, one that’s been central to the Mitre 10 brand over the years, is the Grove family. And it was Grove Mitre 10, some 20 years ago, that was named Watkins Garden Centre of the Year in August 1996.

Possibly the first Mitre 10 Gardener store when the programme was rolled out in the late 1980s, the Groves’ Onehunga store knew its onions so to speak according to the judges, as did Robin McCowan’s McCowan Mitre 10, which also made it into the top four Finalists.

As an indication of how well the Grove Mitre 10 store had done, with a 600m2 area devoted to gardening, garden-related revenues grew from 2% to 17% of Grove Mitre 10’s total cash sales.

Green was doing well for the Groves. In fact the operation had budgeted for a million dollars’ worth of sales from gardening in the next year and the Grove family was also looking closely at a similar Mitre 10 Gardener add-on to the Glenfield store.

Were these isolated instances of local success for hardware in the green market? Probably not – note that at the time Mitre 10 reckoned it had become on the second largest player in gardening based on annual turnover. 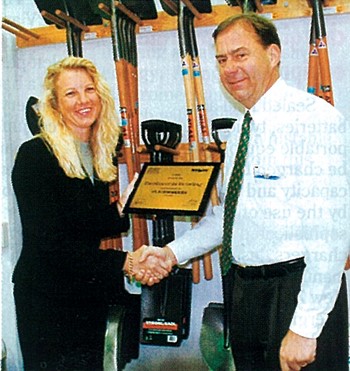 PUTTING THE BOOT ON THE OTHER FOOT

Well known these days as Chairman of The Warehouse Group and before that as the boss at Progressive Enterprises, 20 years back Ted van Arkel was the JV of PlaceMakers Pakuranga.

Ted van Arkel joined Fletcher Merchants in 1985. A key mover and shaker in the formation of the PlaceMakers Joint Venture scheme (among other big picture projects), having set up the first 20 JV partnerships, he decided to become the 21st, in 1992.

His motivation? “PlaceMakers, with its joint venture operations [can not only] take advantage of corporate backing, but also local intuition,” he said at the time in our pages.

In a Management magazine article he is quoted as saying that the JV scheme “went really well.” Having seen that the owner operators were “starting to make some real money” he thought “maybe there’s something other than this suit and tie work. Why not roll up my sleeves and get in my own operation.”

Which is what he did. Some 18 months into the Pakuranga store, he is said to have lifted turnover from $4.5 million to $17 million.

Ted van Arkel would run the Pakuranga store until 1998, after which time he moved into FMCG with Progressive Enterprises.