Upwardly mobile – from a drip to an elegant gush?

While we’ll look at what the future holds (recycled water in showers!?) what about the here and now – the immediate future for wet area products? Phil Weafer plugs the gaps. The last 6-12 months has been a strong period for plumbing products. As a category that had previously been seen as purely a necessity, it is now moving towards a styled one. Consumers are looking into stylish, designed products more and more in these wet areas.

There are many factors behind this shift, the biggest influences according to the people spoken to for this piece, are consumers having more disposable income and the increased number of new builds that has firmed up this year.

So where is business coming from? Logic would indicate that the increased building activity in regards to new homes being built, specifically in the Auckland and Christchurch regions, is the source of business.

However, from speaking to suppliers it sounds like a large portion of the market is business that’s being generated through renovation work being done to homes. Foreno’s Tim Baker feels this is due to much of the public having a little more disposable income.

“I think that certainly in the Auckland and Christchurch markets, which are pretty buoyant, there is a bit more money around and consumers have more exposable income. People who are renovating, especially in the Auckland area, realise how valuable their homes are and as a result are looking to put as much money as they can into them.”

Placing further emphasis on the impact of renovations is Selleys NZ Country Manager Neil Watkins. While he does say there is no data to really back it up, Watkins does feel that a lot of the business the company does in silicones is the result of reno work.

“You’ll probably find the majority of our product would be in the alterations side of the market but there is no way to guarantee that. It’s tradies that are looking to fit bathrooms and kitchens are looking for products that will cure quickly so they can get on with their work. It’s that mentality where the bulk of our work is but we do have plenty of business with new builds as well.”

So we’ve looked at where the money is coming from, but what is it being spent on? Are consumers looking at price first? Or is it performance driven – after all, no-one likes a leaky bathroom!

From gauging opinion from suppliers and retailers (see our Q&A with Mico on page 42) it seems that style is taking a higher priority when consumers are looking for products to spice up the wet areas of the house.

GWA Group’s General Manager James Ewart sees the proliferation of home improvement TV shows such as The Block as a driver behind the aesthetic influence on consumers’ purchasing habits.

“Style and continuity within the bathroom is becoming a much larger consideration. We are seeing a shift from consumers purchasing ad hoc product and mixing it themselves to seeking a full bathroom package where the bath, toilet suite, basins and tap ware complement each other within the space.”

Tim Baker at Foreno also sees style as an important attribute when it comes to what consumers consider for wet area, particularly bathroom, purchases. Baker says one trend he noticed last year that has further strengthened this year that is in turn influencing what fixtures are used in bathrooms is to do with consumers looking upwards in terms of style and design.

“When it comes to bathrooms people are going towards tiled or walk-in bathrooms with tiled walls and glass frames as opposed to the traditional off the shelf shower. There is certainly a trend towards more tiled bathrooms and glass enclosures rather than acrylic enclosures.”

Online education has become a great driver in the hardware industry. Because of this, consumers are walking into stores with ever more knowledge and awareness of the products on offer. What effect has this had, if any, on the market?

James Ewart at GWA Group says that the feedback the company has received from retailers and plumbers is that consumers are looking both for specific brands and products based on the research they may have done.

“From our perspective we have seen rapid growth in our website traffic from consumers, which confirms that they are both educated and engaged. We see brand playing a major part in the decision making process, and consumers are demanding better warranties and product performance – not just the visual appearance of the product.”

Looking at the impact of available knowledge from a different angle is Foreno’s Tim Baker. He says that the increasingly savvy consumers has meant greater training is required from suppliers to retailers to help ensure that consumers are getting the best service available, with the best knowledge.

“I would estimate that 40-50% of our sales team’s time spent in-store would be on product training of some sort. They do formal training, but a lot of it is on the floor, talking to staff so it’s really important.

“The chain retailers don’t always have specialist staff – they might do a little bit of tapware but will also cover other areas. So you have two levels of training: one at a higher, more intense level and the other more general knowledge for those staff members that float around.”

Outtakes from all this? That the Kiwi consumer, despite a firmly valued-orientated outlook, is once again upwardly aspiring when it comes to wet area products. That they’re looking for an integrated look. That despite an educated consumer, such products don’t sell themselves. And that the right balance of informed help in-store and product selection might tick the boxes this season. 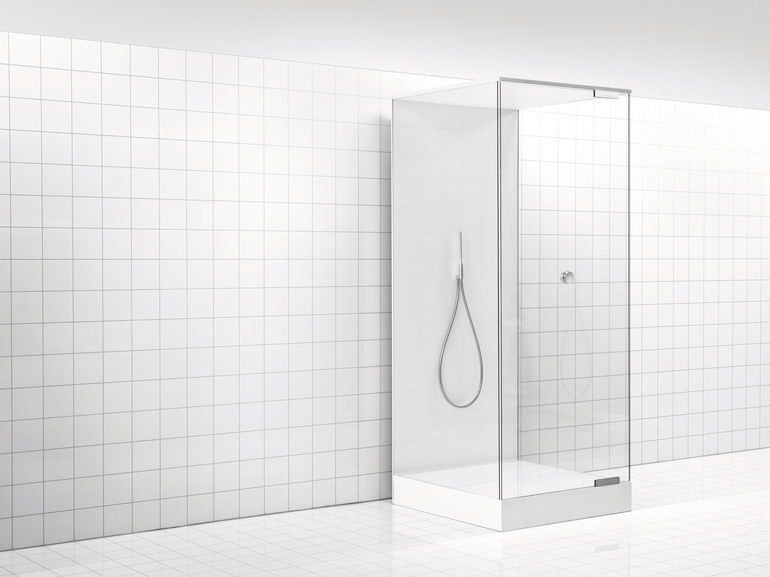 I HAVE SEEN THE FUTURE – OF SHOWERS

Sweden’s Orbital Systems has developed a clever product called the Shower of the Future with the intention of conserving as much water and energy as possible. The shower is powered by technology that enables water savings of around 90% and energy savings of 80%.

With a built-in electric heater for precise temperature control, the system is available as either a standalone cabinet or floor-integrated model and has a closed system which fills with 5 litres of water when the shower is started. When the shower is operational, the water goes into a special drain filled with two filter capsules.

The time to change the capsules is indicated when an LED light in the floor glows, or the user receives a push notification from the accompanying smartphone app. This app also keeps track of the water savings.

WORLD DEMAND FOR PLUMBING TO EXCEED $70 BILLION IN 2018

According to World Plumbing through 2018, a new study from Freedonia Group, the global demand for plumbing fixtures and fittings is projected to accelerate to 5.3% annually to over US$70 billion.

In lower income countries, including many in the Asia/Pacific and Africa/Mideast regions, continued strong increases in building construction spending and rising personal income levels will support growth. In a number of West European countries and the US, expected rebounds in building construction spending will drive demand for plumbing products.

China’s vast population makes infrastructure and sewage system development a necessity, and therefore new homes are constantly being connected to water delivery systems. These systems are reaching previously unserved areas, thereby creating new customers and generating demand for plumbing products. Other industrialising countries in Asia, such as India and Indonesia, and in the Africa/Mideast region will also contribute to overall demand gains.

Of the developed countries, North America is also expected to post significant gains in demand for plumbing fixtures and fittings, thanks to a rebound in the US housing market. Accelerating building construction activity in Canada and recovering construction spending in Mexico will also contribute to demand growth in North America.

Western Europe is expected to post the slowest gains in plumbing products demand through 2018. The region’s mature building infrastructure and slow population growth have combined to limit building construction activity and hence restrict plumbing product gains. Still, while construction spending in Western Europe is forecast to grow at the slowest rate globally, it will nonetheless see some recovery from a low 2013 base.