Is timber getting educated?

What’s the word around building materials and specifically timber right now? Will sticks be superseded by engineered timber? Are we really looking at the age of prefabrication? Steve Bohling reports. 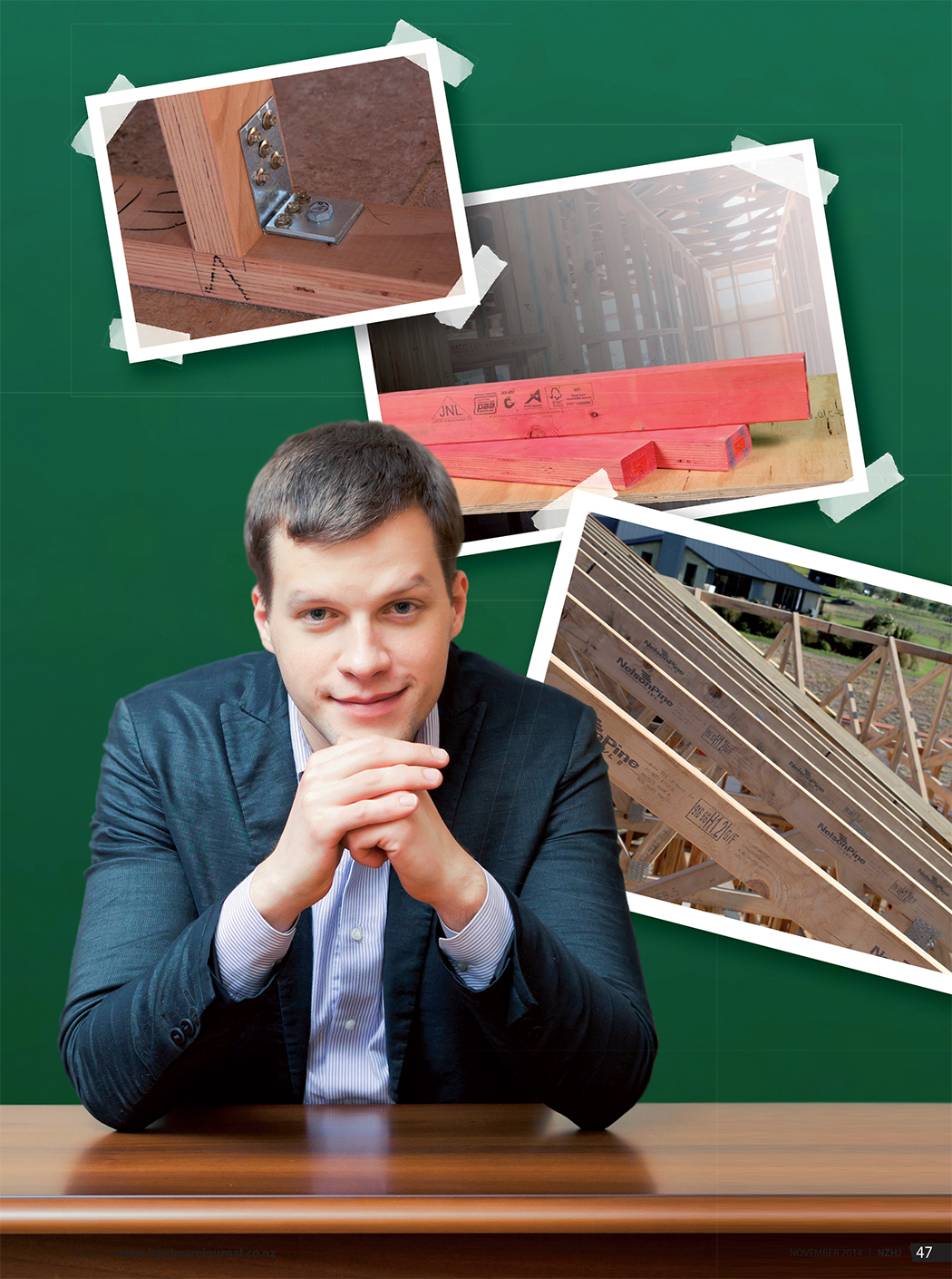 This issue we’re looking at changes to the domestic frame & truss (henceforth F&T) marketplace, to both the materials being used and a seemingly widening gap between how the independents are coping compared to the corporate F&T operators.

Calling around to get a consensus on the health of the market reveals that actually there isn’t one to be had. Auckland F&T is said to be all over the place with some plants booked out for weeks and weeks ahead and others flat. From the perspective of the corporates’ F&T capacity we hear they are very busy so some work is even being outsourced.

Despite appearances, Canterbury F&T hasn’t really taken off in terms of the rebuild, with some fabricators saying “it’s flat as buggery”. Indeed we were told one of the biggest plants as recently as October had described the market as “dead”!

Across the country however some regions are fairly pumping along. Taranaki, Waikato and BOP would be positive but equally there are a lot of regions that are flat-as, like the East Coast, Hawkes Bay and Napier.

As ever, it’s difficult to get an accurate overview of the business of the corporate-owned plants. There is obviously investment in capacity happening but not all are experiencing smooth sailing – especially when it comes to staffing and pricing, we hear.

Indeed, something I heard more than once was criticism of a cut-throat, cut-price outlook that’s pervasive around F&T circles: “There are some very good independents out there but some of the larger corporates are not doing themselves any favours by cutting each other’s throats with the lowest possible cost and questionable quality – to promote wood you have to have quality!” was one no-holds-barred comment.

Another player added: “The F&T industry unfortunately has been too hell bent on providing the cheapest possible product. A lot of the independents would say the same – the corporates are putting a cheap product out there but the country as a whole and the end user are not being done justice to at the end of the day.”

So the F&T market really is all over the place. But the really interesting thing is that, although business is best described as “patchy”, there is plenty happening in frame & truss.

“SOLID TIMBER WITH AN EDUCATION”

Despite the ongoing dominance of solid timber in frame & truss, one of the more interesting developments in the last 18 months or so has been the uptake in particularly independent F&T plants of Laminated Veneer Lumber (LVL), from key players Juken NZ, Nelson Pine and CHH Wood Products.

LVL is like “solid timber with an education” – it’s a high-strength engineered wood product manufactured by bonding rotary peeled or sliced thin wood veneers under heat and pressure. LVL was developed as far back as the 1970s for structural applications and can be used wherever sawn timber is used with a key advantage being that it can be manufactured to almost any length.

Why use LVL in place of stick timber? Isn’t it more expensive? Says one F&T insider: “It’s gun barrel straight – and stays that way if looked after – and the builders love it because of that!”

And even though the premium for LVL over solid timber sits between 12% and 20% (on stud length solid timber framing depending on region and volume; for longer lengths the premium is much less), one view is that this gap could and possibly should be more for “a premium product which should be attracting a premium price”.

First into New Zealand with LVL for framing was Juken with its local J-Frame product in 2009 but it’s fair to say it took some time to really penetrate the market due to a lack of volume production capacity which has since been increased substantially.

Paul Jordan is Juken’s Masterton Mill Manager, who explains in simple terms LVL’s main difference from solid timber: “Every stick and every piece of every stick is fit for purpose so you don’t have to cut out defects,” he says, adding that although LVL comes at a premium per lineal price, not having to revisit a project, straighten walls or plane studs means time and money saved for the builder.

These key points hold true for all of the other LVL offerings by the way, not just Juken’s J-Frame product.

WHAT DO THE F&T PLANTS THINK?

Andy Van Houtte from Nelson Pine International confirms that in the main the early adopters of LVL have been mainly South Island independents like Paul Robertson at Truss Tech in Cromwell who saw an opportunity in LVL and is currently reaping the rewards.

Says Robertson: “My philosophy is to provide the best product we can but over the years we had issues with grading and framing and for that reason we weren’t happy with what was being supplied – we felt we were being ripped off and so was the end user.”

He explains: “Ultimately what we were seeing is that people would straighten a house before they gibbed it and then put the GIB on but the timber was still moving in the background. Basically it was all giving timber a bad name and as an independent we wanted to be different and better than everyone else.”

Before LVL, Truss Tech used laminated Doug Fir but could never get enough, hence the firm’s relationship with Juken and J-Frame. Another factor was LVL’s stability in the face of Central Otago’s robust climate.

“The product was a little dearer than standard timber but we reduced our wastage significantly [from 8% to 1%] because every stick was usable and so much easier for assembly,” says Paul Robertson, “So in actual fact our production capability went up and that gave our clients a really good product. They were saying at the time LVL was saving them up to 3-4 days on an average house in straightening time.”

Clients aren’t the only ones getting more done in less time… Truss Tech itself has also been seeing productivity gains in the order of 20% (that’s an extra day every week!) thanks to LVL.

WHAT DO THE BUILDERS THINK?

LVL may be a localised phenomenon but another LVL convert is Brent Stanley at PlaceMakers Central Otago: “Builders love it – if we didn’t have LVL we wouldn’t sell!” he says.

Paul Dalzell at Nelson Pine International adds: “Once a builder has tried it they are very enthusiastic about LVL. So it’s really about breaking down that initial inertia, that resistance to price and looking more at value.

“Getting that concept across to some is an unwinnable task but where there is a lot of automation and a lot of speed, F&T plants don’t want to be looking at each piece…” And for the merchants, there’s the additional benefit of having just a single stock item.

Paul Stockford at Westlake Timber & Trusses in Wigram Park Christchurch, whose key customers “are as busy as I have ever known them” has been using LVL for the last year because “the market expects a better and better quality product for framing”. “We notice the difference in our manufacturing – it’s about the consistency of the product,” he adds.

It should be added at this point that LVL’s penetration further north has been slower, some of which is due to freight costs exacerbating the premium pricing. But suppliers are working on mitigating this negative as the super-price-competitive and less weather exposed North Island F&T plants also begin to get their heads around what LVL may help them achieve.

It should be said at this point that LVL isn’t the only innovation touching frame & truss right now. Cross Laminated Timber (CLT) is another interesting value-added timber product and then there’s elements of prefabrication also just around the corner of which panelisation in particular will touch F&T much sooner – in fact early next year.

Yeah right? Juken’s Paul Jordan reminds us that frames pre-1970s were largely built on-site and that when frame & truss started to come in there was much poo-pooing from the pundits…

Still, he insists: “The next revolution is going to be panelisation, which is here. It’s been a global trend for a long time and the F&T guys will either have to adapt and come on board or they will go the way of the stick frame carpenter!” says Jordan.