Get out into the great outdoors – get that lawn and that hedge sorted and then get you’re free to zhoosh up that gourmet side of beef on the BBQ. 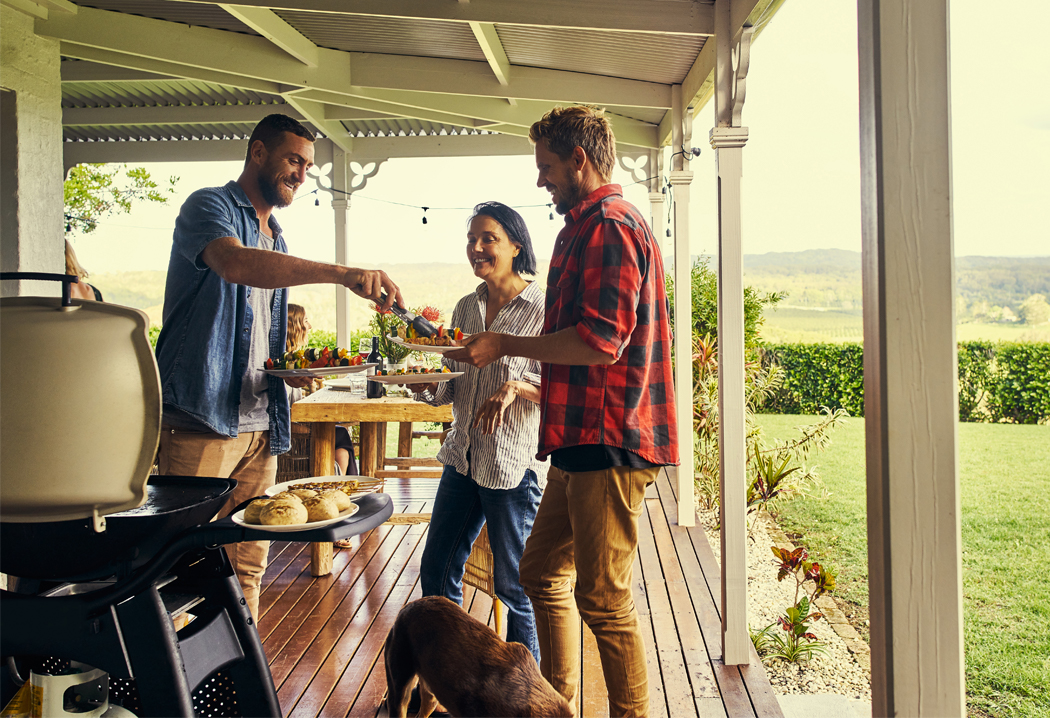 By the time November rolls around, most householders have already tackled the first wave of spring growth in the garden and may even have made the most of better weather with the odd weekend barbeque.

Indeed, the even shapes outside my window are testament to neighbours pruning and trimming before their shrubs and hedges start to get away on them.

And you could certainly hear the buzz of outdoor entertaining in the neighbourhood over Labour Weekend as people made the most of outdoor spaces in which they’re investing more time and more thought than ever.

How to make the most of this outdoor impetus? Starting on the gardening front, David Lunny at CE Lawford says the company has recently introduced new hedge shears and two pairs of lopping shears from German garden tool brand, Freund. With the lopping shears, one is gear-driven, and one has ratcheting, and they feature new lightweight, unbreakable plastic handles.

“There’s a lot of competition in the sector,” he concludes. “We are just at the boutique end – but not at a ridiculously high price point – and sales are pretty steady.”

He adds that a subset of Freund buyers are those who have previously bought at the lower end and been disappointed. “They migrate to become purchasers of higher-priced, quality products.”

David Lunny isn’t alone when he concedes that a sizeable slice of New Zealand’s population today simply doesn’t want anything to do with maintaining large sections any more, instead preferring to live in more formal apartments or on sections with smaller green areas, leaving leisure time to be spent elsewhere.

Having said this, David is firm in the belief that “people that do want sections will continue to garden for their own pleasure.

“And as a hobby, gardening has grown. It’s no longer just knocking back the section that used to go on. There’s also a move from vegetable gardens to raised gardens and you can grow quite a bit in a small area if you get clever.”

However September wasn’t as warm as it was last year, and that has had an impact on consumers in terms of their need for watering equipment and their garden activity.

Still, adds Nick Bright: “From a year-to-date perspective, we had a very kind summer from January onwards and a fairly kind winter, so we’re tracking extremely well going into the season.”

In terms of growing the market, Gardena initiatives like a “Garden to Table” focus on new gardeners involving children all around the country builds on a strong base of “traditional, passionate gardeners” as well as growth in organic gardening.

In this respect, Nick Bright points out that the Gardena range of garden hoses are free of toxins such as phthalate, heavy metals and BPA, helping ensure gardeners’ vegetables are organic and free of harmful chemicals.

“Our new Liano 20m garden hose is also made of a special seatbelt textile material that won’t kink or twist, is very hard-wearing, carries a 30-year warranty and has a 35 bar pressure rating,” he underlines.

“While petrol-powered products have remained strong, it is clear in our view that we are now starting to see a shift starting to occur. Our own experience certainly mirrors this and we have had a very strong take-up and constant sales growth with our own LawnMaster product range.”

Gavin says Steelfort is pleased to have identified this market change early and started working on its range three years ago. “The other difference now is the increase in competitors as we see many of the international power tool brands entering the power garden market.”

Also noteworthy is a big increase in activity in the New Zealand market around robot mowers from a number of major brands, including Steelfort.

Says Gavin Lowndes: “This will see significantly more marketing activity and demand created, although we feel sales will be limited in the short term. Overseas results, however, do suggest that there is genuine growth opportunity likely to occur over the next couple of years.”

Gardena, part of the Husqvarna Group that originally innovated robotic mowing technology back in 1995, has just launched the Sileno City 250 Robotic Mower.

Nick Bright explains Gardena’s target market as “anyone that is fed up with mowing the lawn each weekend and wants to claim back their weekend. People are getting busier and lawns are getting smaller as the house claims the majority of the section.

“You can buy a petrol, electric, hand or battery-powered mower but still have to commit to pushing it around each week. And if you miss a week due to wet weather or being away from home, then the lawn can rapidly become a mission to mow.

“With a Gardena Robotic mower, your lawns are mowed and looking great all year round, rain or shine, and you can get back to what is important for you in the weekends.”

Gardena has had the R80, designed for extensive 800m2 lawns, in the market for a couple of years now, retailing for around $2,500, which is still a hurdle for many, admits Nick Bright.

However the new Sileno City 250 has been designed for 250m2 urban lawns and will retail for $1,499, a price point that has significantly lowered the barrier to entry.

Plus, the Sileno City is hose-washable and is easy to set up, explains Nick, on top of which over time, the little offcuts of grass fall back into the lawn to provide a mulch or fertiliser which gives you a nice clean appearance without the need to remove clippings or empty a catcher so the lawn stays greener for longer, and develops into a nice, lush carpet.

COOKING UP A STORM

Garden chores might be getting ever easier but just the thought of outdoor work is enough for some people to work up an appetite.

Mine quickly grows during an interview with Weber NZ Sales Manager, Rhys Allan, who says more and more people are inclined to spend one to two thousand dollars on a good-quality barbeque that’s going to last for a number of years.

He wouldn’t be drawn on the typical longevity of barbeques in our market (there are too many variables at play, from proximity to the sea, to frequency of use, and care with storage) but several commentators have suggested that Kiwis are often shopping for a replacement, and often a higher-end model, after five to seven years.

Are BBQs just a guy thing? Not any more. Indeed, Rhys Allan identifies a female buyer skew for Weber’s entry level Q range, which still caters for most families, while male buyers are often drawn to the traditional charcoal kettle and the big, premium gas barbeques that cater for groups.

What about Weber’s more “traditional”, charcoal-powered offerings? “A lot of people are experiencing a love affair with charcoal; they’ve been going absolutely ballistic. People are really embracing smoking and low and slow cooking now, and are appreciating the difference in taste,” says Rhys.

“The great thing with the kettle is not only do you grill but you can also roast and bake. You can do everything you can with a gas barbeque but it just takes a bit more time to set up.”

“The outdoor area has become an extension of the home,” says Rhys Allan, “and a lot of new-builds have a standard 240v plug in an outdoor area, so it provides another consumer option.”

“They’ll have a gas mainstay for the family that’s quick and convenient, requiring 10-15 minutes of pre-heating, which is enough time to bring meat up to room temperature. It’s a lightweight, on-the-go barbeque that is easily transportable to the park or holiday home.

“But when they’ve got a bit more time and they want to create a bit more theatre in their backyard, and show off their barbeque prowess to family and friends, they do so on a barbeque that can tackle big joints of meat and more elaborate meals. For a charcoal or solid-fuel barbeque, you’re probably allowing 30 or 40 minutes to get it prepped to a ready-to-cook state.”

BBQ IS A YEAR-ROUND SHARING THING

Rhys Allan also says that Kiwis are now barbequeing the whole year round: “Go onto social media and you’ll see guys in both the North and South Islands in winter doing slow 10-hour or 12-hour cooks on a Saturday.”

And it’s this sort of care and attention that has encouraged the take-up of the Bluetooth thermometer.

“You can get your probe right into the middle of the cut or joint of meat, put your meat into the barbeque and close the lid, and as that meat starts to cook, once it gets to the (medium-rare) temperature of 52 degrees, it not only shows on the LED temperature display but automatically sends an alert to your phone, advising that your target temperature has just about been reached.

“At this point you remove the meat from the barbeque and wrap it in tinfoil for around a third of what the cooking time would be, and you lock in all the moisture and cooking juices. What this is now allowing people to do is purchase better cuts of meat because it eliminates the risk of serving up under- or overcooked food.”

So the BBQ isn’t just a place for the guys to gather round with a beer? Actually, says Rhys Allan, “It’s a good hobby to be involved in and it’s still great family time for many.

“We love our backyards, we love to entertain – it’s something we’ve been brought up with.”

Rhys Allan also insists there’s great untapped potential in our barbeque market and people are only governed by their imagination.

“Social media is important but so too is positive word of mouth – and that means putting flavour into people’s mouths.

“People are asking each other for advice and ideas on social media and it’s generating lots of feedback.

“It’s great to see the shared interest and inspiration, and it’s bringing plenty of new people to the craft.”

On that note, I think I’ll pop a couple of bottles in the fridge and venture out back with my sleeves rolled up!