Frame & truss is at the very heart of residential construction. With just a hint that home builders are becoming stretched, how is the sector coping? And what about this shortage of detailers? Steve Bohling reports. 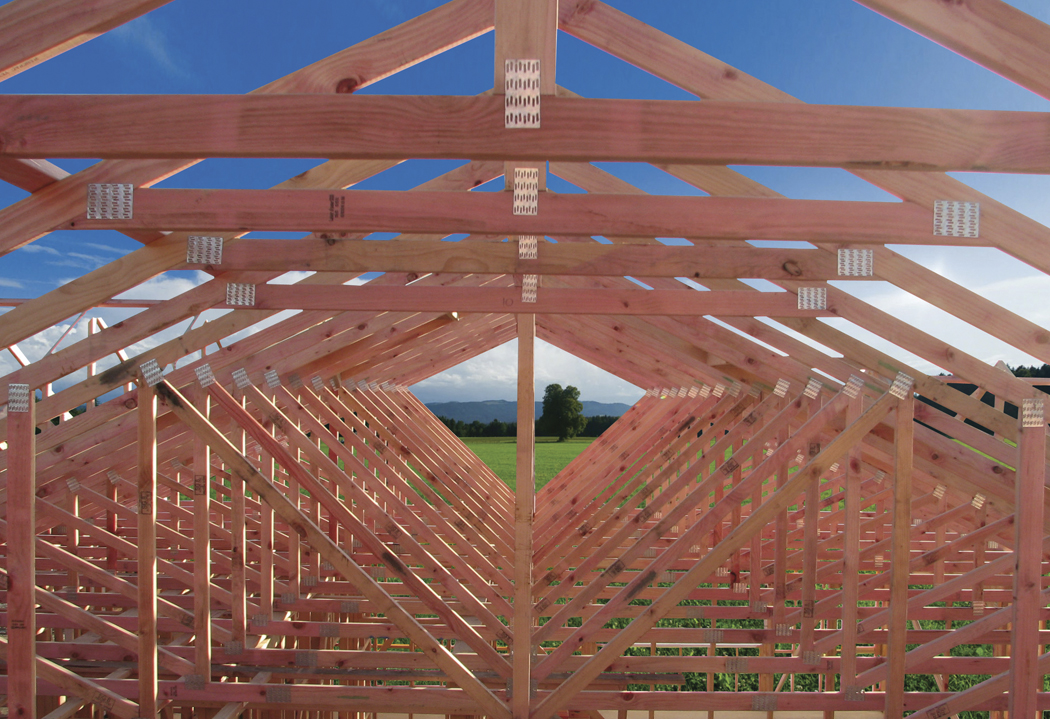 It’s fair to describe the frame & truss sector as having been through a process of consolidation over the last few years, with only a small and reducing number of plants these days not attached to a hardware store or network.

Now the market may not be shrinking but the number of players is – today, from the 104-odd sites that were serviced for example by MiTek 10 years ago, 72 are still operating having consolidated or upsized, which must be a fair reflection of the health of the sector.

IS F&T SHRINKING TO GROW?

To cope with demand, in the last 3-4 years, F&T has also been experiencing some vigorous renovation and renewal with the big players getting bigger and more automated.

And business is good, particularly in the main centres. “We’re racing towards Christmas,” he says. 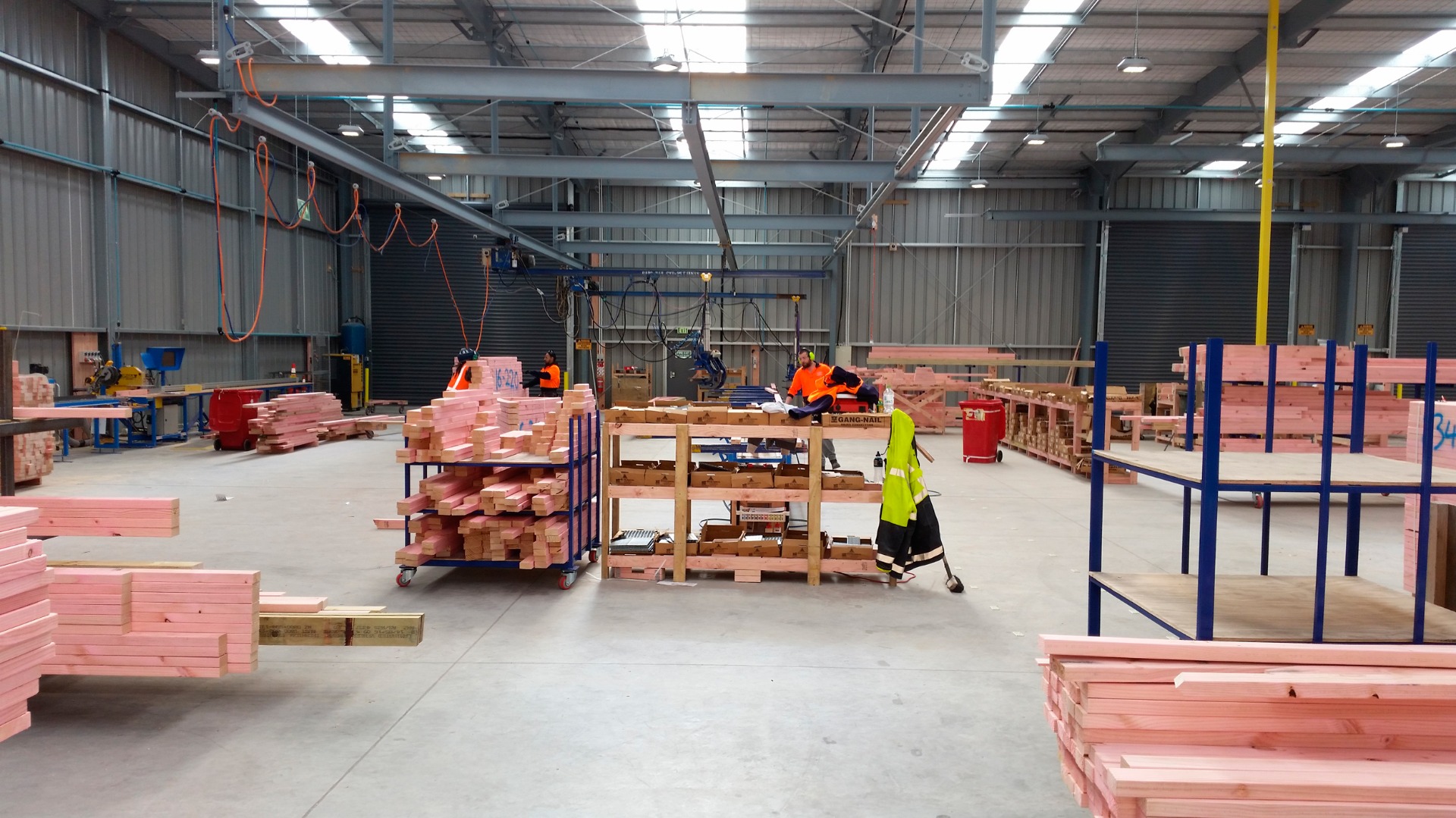 With five new purpose-built sites finished and its existing trio of plants upgraded (and with more to come in this respect), PlaceMakers now has eight strategically located regional hubs located at Whangarei, Auckland, Hamilton, Taupo, Porirua, Nelson, Christchurch and Mosgiel.

The latest plant, in Porirua (see the photo above), opened for business mid-year, the former site having become space limited to the point where work had to be outsourced.

“Phase three” of the developing PlaceMakers network, says Blake Bibbie, will be an additional injection of capital spending to further increase capacity.

“There is no point having a big shed with old gear in it!” he says. “So we have invested some of the money we’ve earned in the latest equipment to increase efficiency and improve the quality of the product and remain competitive in the marketplace.

“The other by-product of this investment is that, should the market turn down, we can also adjust accordingly.” 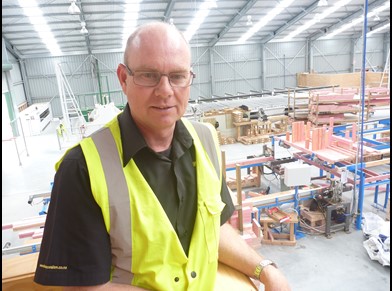 From a nationwide network to a plant working on a more local scale, Mike van der Hoek (right), MD at Thomsons ITM, has also been busy investing in both new plant and people.

Since our visit last year, the Thomsons operation in the heart of the Waikato has added automation to its truss table and a second Razer saw with a feeder between the two to improve material handling and workflow.

The net result? Productivity has increased by 30-50% depending on the complexity of the job. Thomsons has also added a second framing line.

But the operation is still farming work out, despite all this investment. How come? People, in a word.

Mike van der Hoek says a mix of additional people and training are the missing ingredients that will get his operation to 200 cubes a week from the current level of 170.

Along with most of the industry, it seems, he admits that detailing “has been a constraint” and has been using contractors to fulfil his detailing needs.

With such a limited supply, Blake Bibbie readily agrees that PlaceMakers too has had to work at managing and retaining detailers.

To paint a picture, currently some 60% of PlaceMakers’ detailers are New Zealand based. Of the remaining 40% who are contractors, 15-20% are working from overseas.

What about the skills of the latter? “Perfectly adequate in terms of skills and diligence,” says Blake Bibbie, who adds that PlaceMakers has actively upskilled its offshore resource.

Taking this intent to upskill one step further, PlaceMakers is setting up a frame & truss “school” to be based at its Waikato-BOP plant in Hamilton.

This facility will take in a dozen trainee detailers picked off the shop floor from within PlaceMakers – typically “people with good experience but who want to develop themselves further”.

Blake Bibbie calls this initiative “growing our own timber”.

In such a tight market for detailers, this approach may be a better bet than taking tertiary educated draughters who may not relish the more repetitive aspects of the role…

The Hamilton curriculum will dovetail into both MiTek’s well established and broadly recognised training course and the Building & Construction Industry Training Organisation (BCITO) detailing programme, by the way.

MiTek is not alone in recognising the need for training. “The industry is constantly in need of detailers,” agrees Jon Hill at Pryda.

To help address the shortage, Pryda has introduced a nine-week, off-site intensive training programme which complement the BCITO qualification.

“To date,” says Jon Hill, “customer feedback has been very positive and collectively we have introduced a significant number of new detailers to the industry. We have provided a commitment to the industry around assisting with the shortages of detailers and will continue to introduce ‘new blood’ until the needs are met.”

What about the formalised training offers that the Frame & Truss Manufacturers’ Association (FTMA) has helped develop with BCITO?

What has been progress to date? For BCITO, Industry Advocate – Stakeholder Engagement, Helen Hines-Randell, reports that, since January 2014 when the detailing Certificate became available, 13 people have graduated and 23 are currently enrolled, mainly people already working in detailing or in fabrication.

Is this not a little underwhelming, given it was estimated there were some 500 locally based people working in frame & truss detailing at the time of the Certificate’s inception?

Hines-Randall admits that at the outset it was “fair to say that a lot of employers in the area were not used to formal training around detailers.”

But, having asked around the sector and heard what both PlaceMakers and (through the grapevine) Carters have put and are putting in place, this negative outlook towards training is clearly changing.

What’s more, reading between the lines, although BCITO comes across as slightly disappointed with the uptake so far, its renewed efforts into getting the message out have been rewarded with “a bit more traction in the last 6 months,” she says.

NOT JUST ANOTHER COG IN THE WHEEL

In the increasingly risk-averse construction industry, the general opinion is that the F&T sector is a pretty solid and reliable performer.

Some of that is down to the people. “The detailer is a critical cog in the wheel,” emphasises MiTek’s Graham Hunt.

If the detailer gets it wrong, thanks to the high levels of automation these days, the job stays wrong, all the way to the building site – the design error becomes a manufacturing error and therefore expensive.

Thomsons ITM’s Mike van der Hoek agrees that detailing is much, much more than “poking numbers at a screen” and that the old adage of “rubbish in, rubbish out” is perfectly applicable.

In this respect, he only sends out the non-difficult jobs to external contractors. Non-difficult? Doesn’t he mean non-critical?

No – there is no such thing as a “non-critical job”, he says. “Stuff ’em up and they’ll all cost you money!” he underlines.

For an article like this, we always seek to be as inclusive as possible of all the major players in a particular sector.

In this respect and in this instance, Carters sadly declined to discuss what we hear are significant initiatives around training. We will try again to find out more at a later date.

However I think you can see that we have cast the net wide enough to get a decent handle on frame & truss sector. In a nutshell, although training proceeds apace, we’re still short on local detailers.

And, although many players in one way or another were keen not only to upskill their own employees but also ensure the quality of their contractors, there remains some way to go before even the well-trained detailer is also a formally qualified detailer.