In the garden – still a great place to be

Round two of our lawn & garden category round-up reveals more good news from suppliers as well as some very positive reports and some interesting trends from the retail floor. Jess Brunette reports. 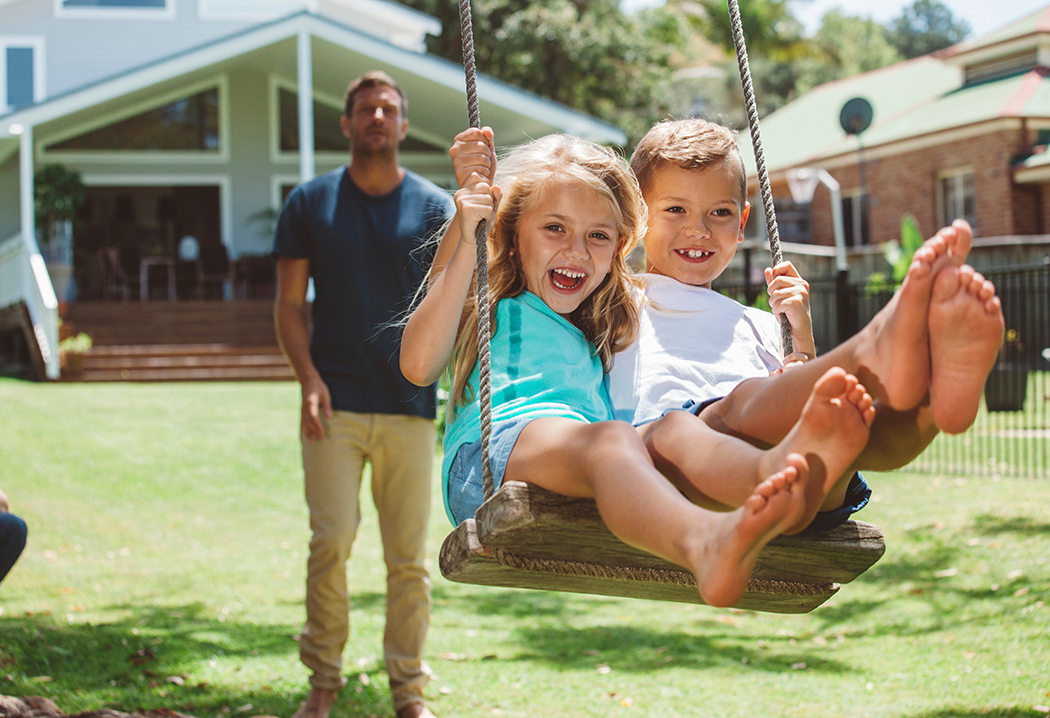 Following on from last month’s lawn & garden feature, I spoke to more major players, both in supply and retail, who have been going great guns following on from an unusually long season as well as renewed and growing interest in the category from the general market.

Husqvarna’s General Manager Gardena & Consumer Brands, Nick Bright, reports that the last year has been a big one for lawn and garden.

“We are in a very good place and we have organic growth within our Gardena brand but then also the acquisition of NETA has delivered some significant volume and value to our business,” he says.

“We also had some good weather with well-timed weekends for sunshine, which makes a world of difference for our customer’s retail sales – so they are all up, which makes this category a great place to be.”

In terms of hot products, Nick Bright has seen retractable wall mounted hose reels and larger hose ranges do very well and is happy to report that the company is in an excellent position to handle potential demand for the coming spring.

“We are in a very positive inventory position delivering DIFOT in the high 90s, so we are set up to have a great season ahead,” he says.

Echoing Bright’s thoughts (and those of the pretty much any player involved in lawn & garden), Kärcher National Sales Manager Retail, Kere McBratney, has been pleasantly surprised by a “positive and very unusual season compared to the last one”.

“The weather was actually reasonable last spring and the category didn’t start to move until end of January but what we found was that Indian Summer pushed the category right out and things were very buoyant until mid-May,” he says.

Kärcher’s McBratney is also happy to report that last year’s trend where consumers were cottoning on to the benefits of looking up in terms of price as a value proposition has continued. He still has concerns however that some retailers aren’t getting that message.

“At the end of the day it’s about getting everybody to understand there is still a buck to be made – so people should be selling on value rather than just pulling the price lever. And I think the risk sometimes in DIY is to treat things that are more like a capital expense in the home as more of a consumable item.

“So, if you aren’t having a good start to the season, you crank the old price lever in the hope of getting some volume but all you do is create an expectation from the consumer and they aren’t stupid, they remember,” Kere McBratney says pointedly.

Speaking of retailers, someone whose bread and butter is in garden consumables is St Lukes Kings Plant Barn Manager, Simon Andrews.

Andrews also found the last season unusual with a “crap spring” followed by an “unbelievable autumn” that enabled the store to meet its budgets for the year.

Being on the front line at a very popular central Auckland store, Simon Andrews is in a good position to report on who is coming in and, more importantly, what they are taking out.

The good news for the category is that he is noticing increasing numbers of younger gardeners in store. “I love seeing that the young are getting back into it as that’s a generation we have been missing for a while.

“The young, upwardly mobile demographic [aka the hipsters?] are into the terrariums, the cacti, the succulents, the kokedamas, the orchids, all these obscure things that they have in their rooms that are architecturally quite cool and our sales of houseplants would have grown 200% so we are doing huge numbers of them!”

Andrews is optimistic that even younger generations are coming through as well.

“Since we had the economic downturn five years ago, children have gotten into the vege gardens at schools as well, so we are getting them coming in and we are doing a lot more kid’s stuff for further down the track.

“Obviously, they are our next customers, so it’s exciting that we are getting the younger people back through because, realistically, the older people are going!”

The changing face of the housing market may also be having an effect on the types of products that do well in lawn & garden. With younger generations either renting or owning apartments rather than quarter acre sections, products that are portable, and don’t require significant time or storage are doing well.

“There’s a trend toward well established, bigger edibles now so things which almost have fruit on them and in the ready to use chemicals that you don’t need to mix and can quickly throw out as people don’t have a garage to store it in and don’t want the chemical lying around,” Andrews says.

She has also noted a continued growth in the popularity of organic and more natural products that not only appeal to the more ecological and sustainable-minded consumers but are also providing alternatives to chemicals being taken off the market.

“There are a lot of changes in terms of chemicals. A lot of the old favourites like Shield and Lawn Guard aren’t available anymore so it’s a matter of educating the consumer that many fungicides and systemic products are being phased out.

“So our focus is to keep learning and keeping our staff trained and up to date with the best way to treat problems that customers are coming in with,” McKee says. 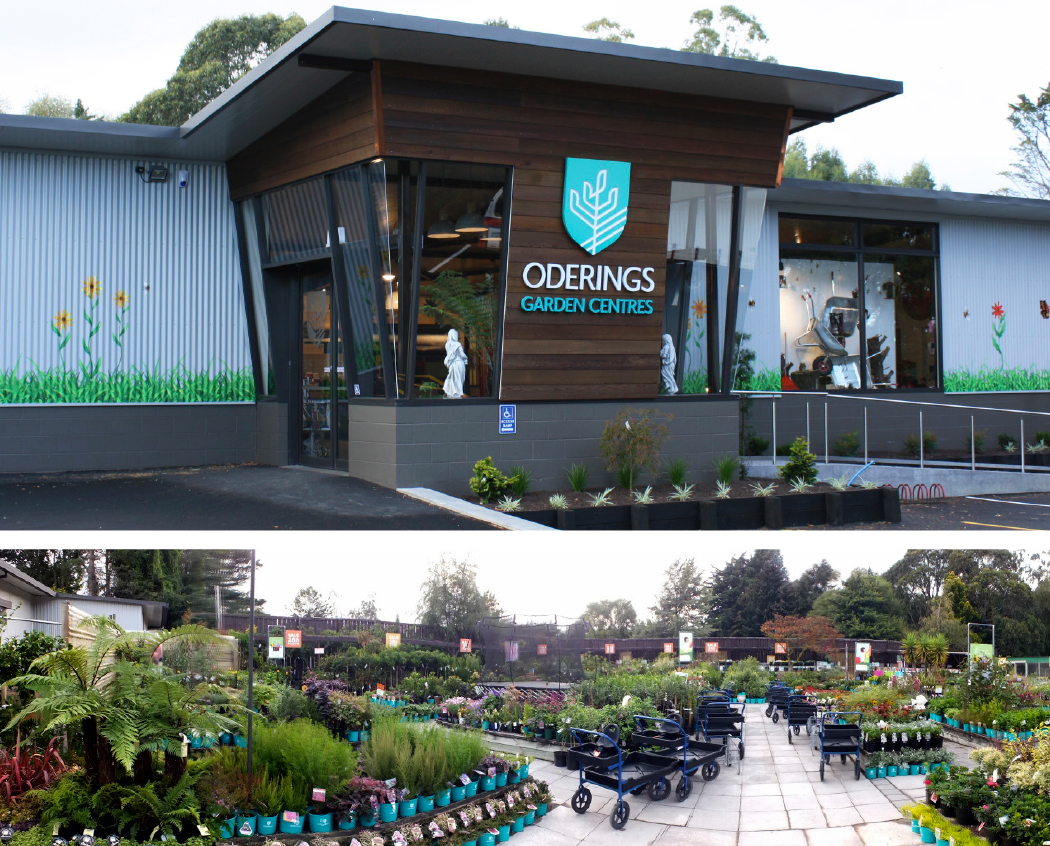 These legislative challenges in lawn and garden don’t seem to have affected sales within the category however and strong demand has seen new facilities pop up in the last year.

Oderings’ Nicola McKee for one is happy to announce that phase one of the rebuild of the Oderings Cashmere Road store in Christchurch is now complete (see the photos above).

Already in line for an update, the store was also damaged by the Christchurch earthquake and in need of major repair.

McKee explains that the company saw the rebuild as an opportunity to put all of its new brand ideas into the Cashmere store.

“It’s about trying to translate who we are into a visual space for our customers to feel inspired in. We are really trying to make the customers aware of what it is that they can do, to give them ideas and make it easy for them to find what they are after,” McKee says.

Oderings’ Marketing Manager, Pamela Smith, gave some insights into the new brand ideas that have been showcased in the new build.

“The new logo includes the Oderings crest, representing a family tree that symbolises both family heritage and strength in nature while the fresh colour palette helped build a foundation for the illustration developments inside.

“These initiatives and many more have been introduced into the Oderings Garden Centres and at Cashmere the whole concept can be seen in full effect,” she explains.

Stage two of the Cashmere Road rebuild is currently underway, including a café which will be opening in the spring and, across the other side of town, the Philpotts Road store is next on the list to receive an overdue facelift and a café. 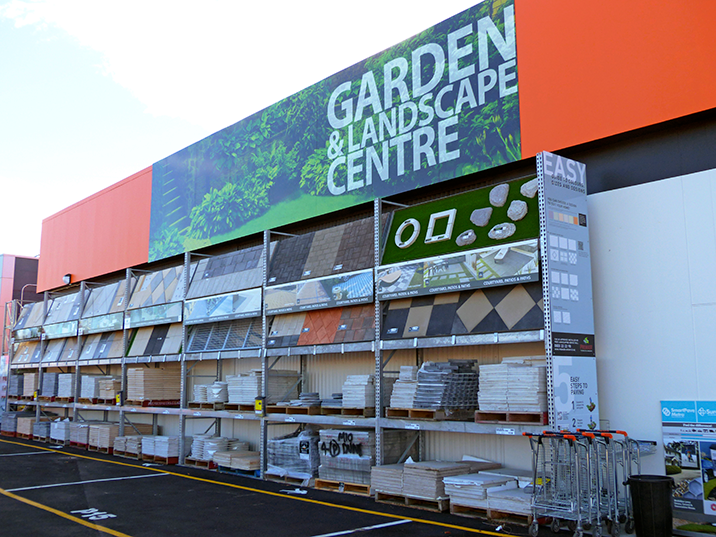 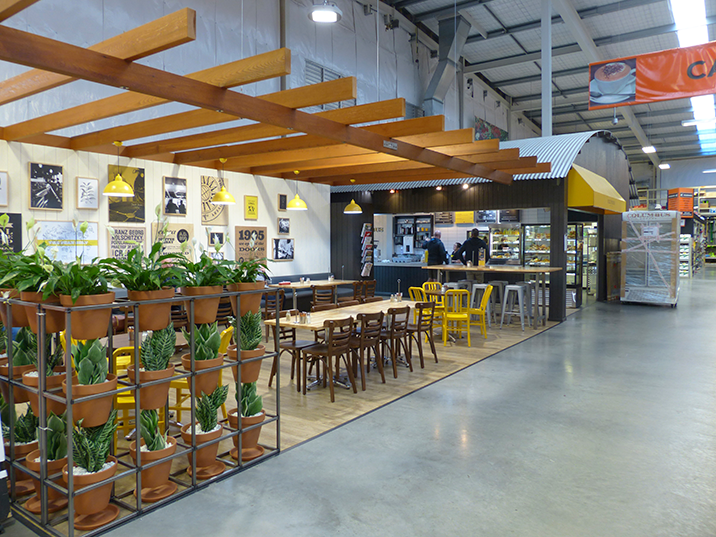 Another player doing extremely well with a new facility is Mitre 10 MEGA Dunedin, which, in Winter 2015, converted an adjacent tyre shop into a standalone garden centre with a drive-through landscaping offer.

The new set-up opened its doors in April – how has the response been from locals so far? Neil Finn-House, Group CEO: “It’s been really good. We built the building, made a new product file and then we increased our team numbers so there are 18 staff in there now with a new manager.

“The combination of real expert staff and a very comprehensive product file has been incredibly well received,” he says.

Then there’s the added benefit of the extra ease of use brought by the drive-through facility which includes 15 dedicated car parks and trailers.

Neil Finn-House says this additional facility has been popular with both DIY and professional consumers who’ve been enjoying being able to put large loads straight into their vehicle or trailer rather than navigate the main store’s massive car park.

Then there have also been some extra mural activities which have added to the new venture’s success. Activities like a recent “landscaper’s breakfast” also generated great response from locals with excellent turnout from schools, sports clubs and developers as well as professional landscapers.

Most importantly Neil Finn-House confirms that sales have been extremely strong since the facility opened, just more evidence – if any were needed – that the lawn and garden category is still a great place to be right now.